McDonald Services is a full service, licensed and insured investigation agency located in Windsor Heights, Iowa. We are committed to providing you with prompt and effective services. At McDonald Services we approach every client with a focus on integrity, advocacy and understanding. 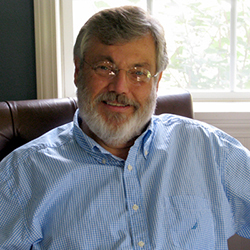 Jim became a licensed Private Investigator in 1989. Prior to becoming a Private Investigator, Jim owned a successful business within the office equipment industry. That business dealt with document security and fraud prevention as well as establishing internal controls within businesses and financial institutions. In all, Jim has been self employed for over 36 years.

During the 1980's Jim was a guest instructor at the Iowa Law Enforcement Academy concerning check fraud and document alteration. He was also a presenter at several "Document Awareness" presentations put on by the Iowa Division of Criminal Investigation.

As a private citizen, in the '80s and into the '90s Jim did undercover decoy work for the Des Moines Police Vice and Narcotics Unit. This work resulted in numerous arrests and convictions.

One of his first cases as a PI was to locate the birthmother of a 24 year old young man who had been adopted shortly after his birth. He found her just a few hours later in Florida. Since that time he has established Origins, Inc. as a separate company whose purpose is to search for and reunite persons separated by adoption. Over the years, working as an intermediary, he has reunited several hundred adoptees, siblings and birthparents.

Over the years Jim has been exposed to any number of different situations. Through that exposure, his experience in different types of investigations has grown. He has been involved in many First Degree Murder cases and other Class A Felony cases, both State and Federal and has worked on many lesser charged cases.

In 2002 Jim travelled to Las Vegas, Nevada to locate a 47 year old man from Iowa. The man had been missing for over six years. He had been living as a homeless person in and around Las Vegas. To make a very long story short, the man was located and contact was established.

Through the years, Jim has worked with numerous Police Departments around the country in conjunction with Missing Persons Cases and Runaways.

In 2008, in conjunction with Iowa DNR, Keep Iowa Beautiful and various county and local governments, Jim established and implemented the first high-tech unmanned surveillance program in Iowa to apprehend and prosecute persons illegally dumping trash on Iowa's roadsides and other public places instead of taking the trash to landfills.

Jim has been a presenter and speaker to many groups, speaking about document fraud and his work as a Private Investigator.

Jim has always had an interest in antique automobiles. He has belonged to, and held office in, numerous car clubs and served as a judge for car shows. He is currently on the committee for the Salisbury Concours d’Elegance held at the Salisbury House in Des Moines, Iowa. He has also worked with the newly formed Iowa Transportation Museum which is being established on the grounds of the Spaulding Carriage Works in Grinnell, Iowa. Jim located and arranged the purchase of the only Spaulding automobile in existence for the museum.

Jim also inspects and appraises antique and classic automobiles. In 2008, he completed the appraisal of a collection of over 75 antique automobiles in the estate of an Iowa man.

Jim has also been involved in numerous estates and conservatorships, inventorying, cataloging and arranging for the sale of large amounts of assets. The largest of which was an auction that consisted of seven 26 foot trucks full of antique and collectable items.

Many of his cases have involved literally thousands of facts that have to be organized and investigated.

Jim feels that his strongest asset as an investigator is his ability to conduct interviews and put people at ease to help them recall more details in what they observed.

McDonald Services works with several other investigative agencies, both local and national to provide our clients with the best, most effective results for their investigation. We also work with other professionals with expertise in various other areas as necessary.

We find them after the other's have failed

Clients that have moved or otherwise cannot be found

Witnesses that have moved or have otherwise disappeared

People with questionable pasts tend to prey on people that don't have the resources to determine if that person is, in fact, the person they claim to be.

A simple background check through our company will turn up many facts about a person's past. The more important the relationship or responsibilities, the deeper it pays to delve into their past.

This package gives you what you need to find out if a person really is who they say they are.

- Confirm or Locate Date of Birth

Package B expands the background check to include a Nationwide Criminal Database earch for felonies and misdemeanors in all 50 states.

- Confirm or Locate Date of Birth

Please call for an estimate

Our advanced background check is specialied and varies from case to case. We will charge on an hourly basis, with the rate being $95 per hour, plus expenses.

- All of Packages A and B

After reviewing what needs to be researched, we will provide you with an estimate of the cost.

We are committed to providing you with prompt and effective services.
Contact us TODAY for your FREE initial consultation!